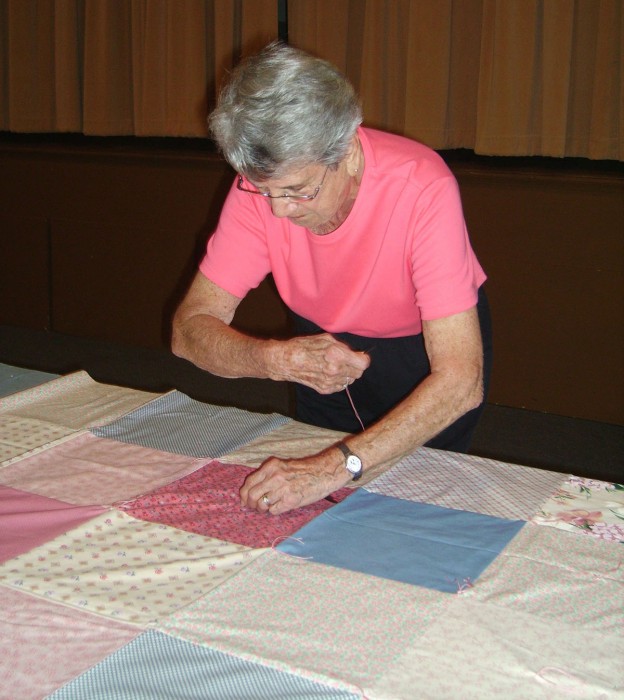 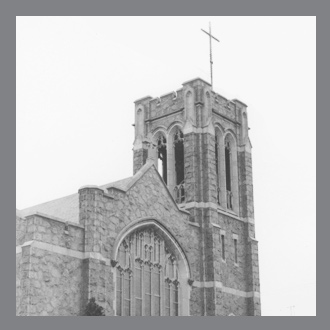 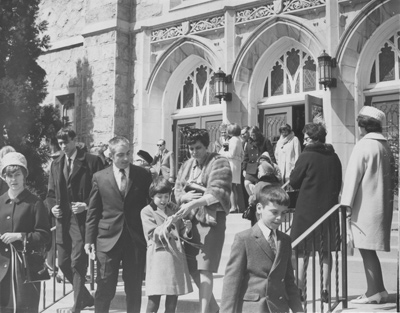 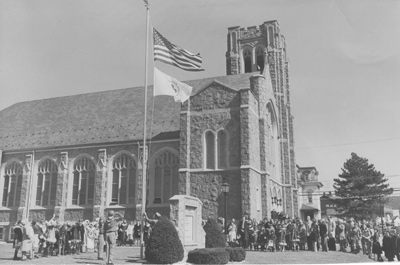 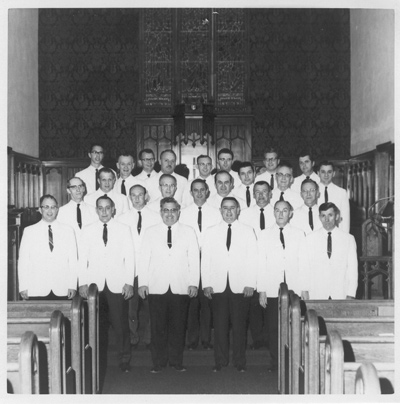 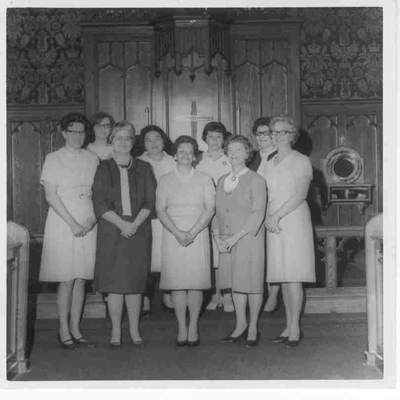 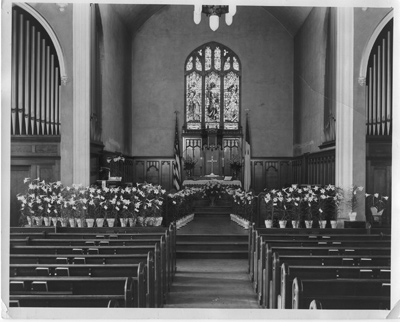 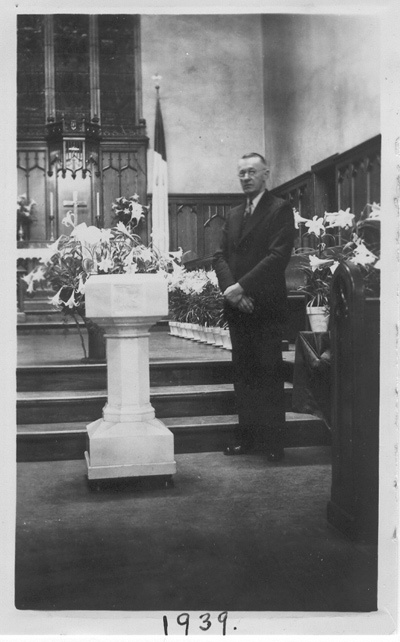 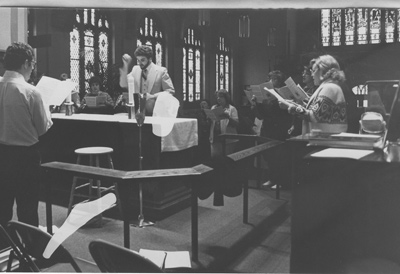 Explore decades of St. John’s history–from its founding in 1882 to present day.

Lutherans first met to worship in what would become Emmaus in 1742 in a little log church. The little church, at what is now Third and Adrian Streets, became exclusively Moravian by 1747. Other faiths were not permitted when Emmaus was organized as a closed Moravian village in 1759.

The restriction against other faiths in Emmaus was lifted about 1835. In 1875 Lutheran and Reformed citizens of Emmaus formed their own congregations, worshiping in the same building on alternate Sundays, first in the Moravian Church and then, beginning in 1882, in their Union Church, built that year at Third and Green Streets on land donated by Dr. Charles F. Schultz.

1882 is considered the official year of the founding of St. John’s Lutheran Church.

48 people partook of the Communion held April 30, 1882; these persons constitute an unofficial list of charter members..

All services were conducted in High German until 1888 when one service each month was held in English. German was eliminated entirely in the late 1920’s.

On October 5, 1924, the new church at Fifth and Chestnut Streets was dedicated.

In 1944 the joint pastorate with Western Salisbury was dissolved and St. John’s has since been served solely by a pastor.

In 1953 the St. John’s Lutheran and Reformed Cemetery Association, Inc., assumed its present corporate structure as an entity distinct from but related to both congregations. The old Lutheran and Reformed Cemetery at Keystone and North Streets dates to before 1888, when it had 154 lots according to an old chart. The acquisition of the property now known as Northwood Cemetery located at Keystone and Harrison Streets began in 1914.

The Parish Education building was dedicated in October 1954. Special permission was obtained to reopen the Seisholtzville quarries in order to match the stone with that of the church building.

A group of members left St. John’s to form a mission church which ultimately became the Lutheran Church of the Holy Spirit in 1961.

In 1972 St. John’s sponsored the resettlement of two refugee families from Uganda. In 2002 a family from Bosnia was resettled by the congregation.

During the 1970’s three properties were purchased to provide off-street parking; a new church office complex was constructed; and the church bell was electrified.

In 1982 St. John’s for the first time hired a full-time lay professional church worker to serve as Director of Music and Education, F. Allen Artz III, who served in this position until 1986. He was succeeded in 1986 by Darryl E. Dech who served until 1994. He in turn was succeeded by Melanie E. Werley in 1994, who served in this position until 2012. Darryl and Melanie were certified lay rostered leaders of the ELCA known as “Associates in Ministry.”

Throughout the 1980’s and 90’s members of St. John’s were involved in service to others near and far, especially through “St. John’s Construction Company” which did rebuilding of homes for hurricane relief in St. Croix, USVI, repairs at Bear Creek Camp, construction for Planned Parenthood and Elephant’s Trunk, Alliance Hall in Allentown, Northeastern Pa. Synod Office, ramps at private residences throughout Emmaus, and many other projects.

Throughout the 1980’s the church facilities were increasingly used by many community-based groups.

In 1998 the church kitchen was completely gutted and renovated.

In October 2000 our neighbor, St. Matthew’s Evangelical Congregational Church, suffered a boiler explosion and loss of use of their building. St. John’s provided a church home for St. Matthew’s for worship and for education until their renovated facilities were ready in summer 2002.

From 2005 through 2007 extensive rebuilding and restoration work was done to exterior stonework on the West Gable, the Chimney, and the Bell Tower. The Bell Tower required steel rods and cables to reinforce its structural integrity and many fabricated stones had to be replaced. It was enshrouded in scaffolding and mesh cloth from September 2006 until July 2007.

In September 2006 the Rev. Dr. William “Woody” Maxon was hired as an “Assisting Pastor” for 20-25 hours per month to help meet the ever-growing need for pastoral ministry.

In 2007, after a multi-year period of education and transition, St. John’s returned to the historic Lutheran practice of celebrating the Sacrament of Holy Communion each Sunday.

Pastor Lyn Langkamer began his work at St. John’s in 2010 as an assisting pastor. Before coming to St. John’s Emmaus, Pastor Lyn was pastor of St. John’s Lutheran Church, Allentown. 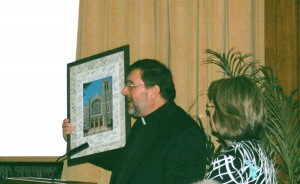 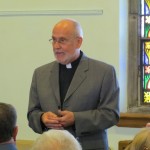 In the summer of 2013, St. John’s was blessed as Pastor Lyn agreed to serve as Interim Pastor where his role in the pastoral ministry at St. John’s has been broadened. 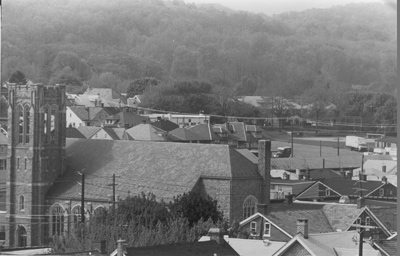 View of Emmaus from Belltower of St Johns Lutheran.